The Asus ProArt PA279CV targets content creators with crisp image quality and extensive connectivity – and it hits the mark.

You can create content on any monitor. Really! Photoshop will even launch on a 1080p monitor that costs less than an evening for two. If you’re serious about your job, however, you’ll probably want something more.

Enter the Asus ProArt PA279CV. This 4K monitor offers accurate colors and important pro features like precise gamma presets. It even has USB-C connectivity, making it a great choice for creators looking to upgrade their laptop screen.

The Asus ProArt PA279CV is a 4K 60Hz monitor that targets full coverage of the sRGB and Rec.709 color gamuts. It also has a USB-C port with DisplayPort Alt Mode and a 65-watt power supply.

At $499, the PA279CV goes on par with alternatives like the BenQ PD2720U, Dell S2722QC, and ViewSonic ColorPro VP2768A-4K. Asus’ specs are roughly similar to most of these monitors, but they have an edge when it comes to connectivity.

The Asus ProArt PA279CV doesn’t make a great first impression. Its display bezels aren’t exactly tall, but they aren’t small for a monitor sold in 2022, and the chin on the bottom edge of the monitor is taller than most.

A ruler is included on the bottom bezel. I don’t know if there’s any real benefit to this, as it’s not something I would use in my job. Maybe some photo editor need it. There’s also a set of front-facing monitor menu buttons, which look dated. 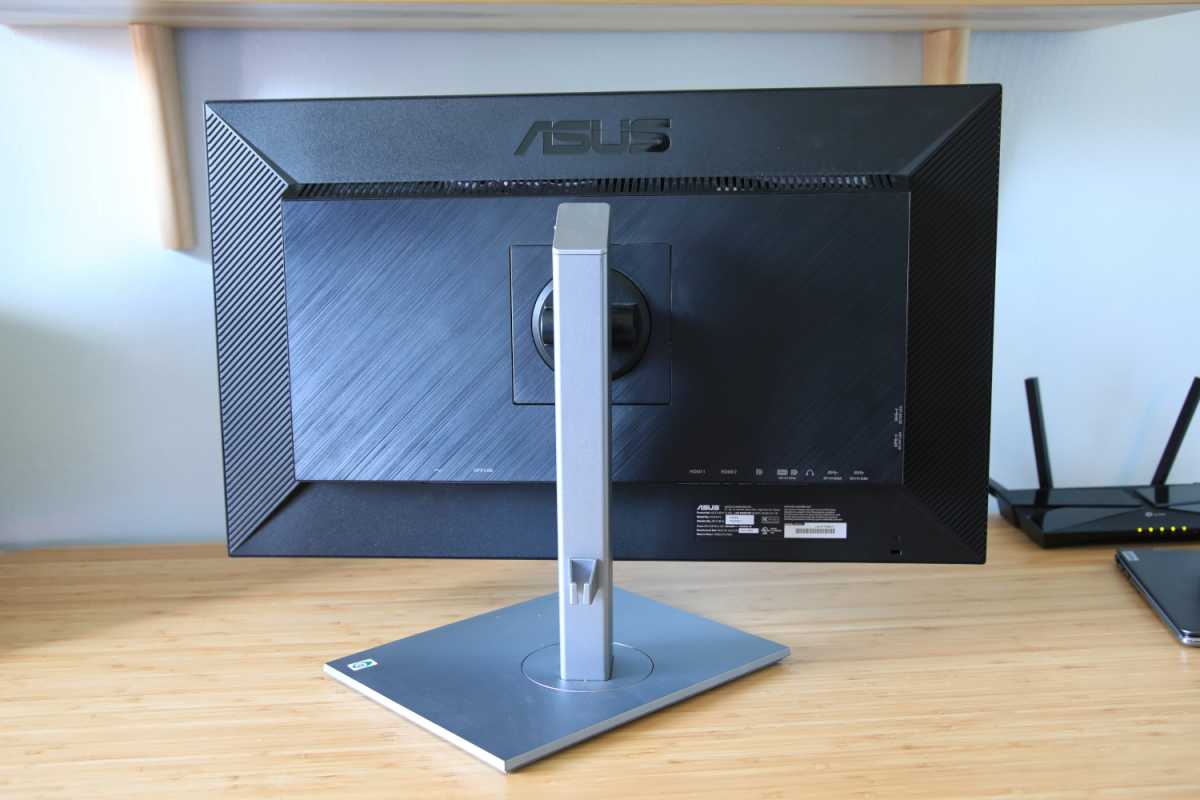 It’s a similar story at the back. The monitor’s plastic chassis has a simple matte black look with a faux aluminum finish in the center. It’s not fancy but it’s fine for a desk or workstation.

An ergonomically adjustable stand keeps the PA279CV upright and level. The stand is covered in a rough plastic that feels inexpensive when handled. I also think the monitor stand base is slightly larger than needed.

In short, it’s not an attractive monitor. I don’t think this is a serious issue given the monitor’s low price and functional focus, but those who care about how a monitor looks when it’s off will prefer a Dell or LG monitor. 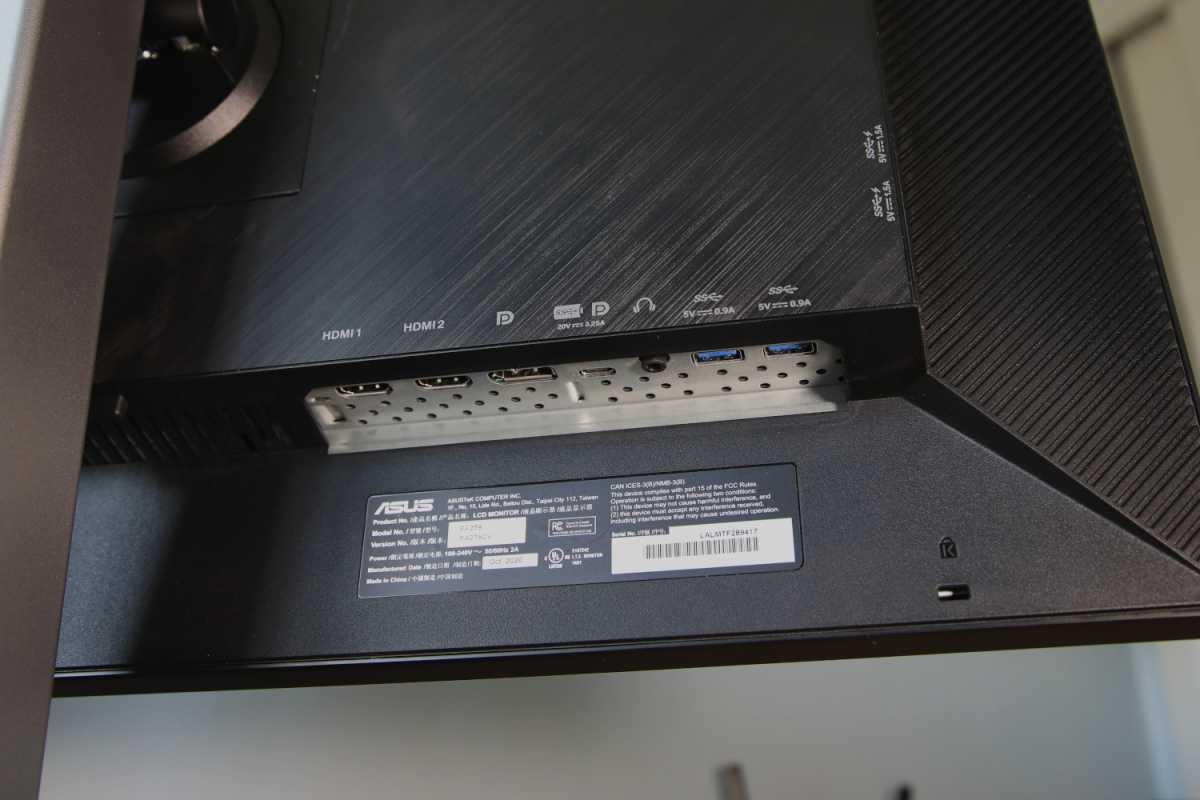 The ProArt PA279CV has solid connectivity for its price. The special thing is the USB-C port, which includes DisplayPort Alternate Mode and up to 65 watts of power. That’s enough to charge most thin and mid-range laptops, although higher-end laptops like a Dell XPS 15 or MacBook Pro 16 need more juice.

The USB-C port drives four USB-A ports, providing some hub functionality. The USB-A ports are placed on the back and are a bit difficult to access. The monitor doesn’t have an Ethernet port or DisplayPort output, so it doesn’t perform as well as Dell’s P2723QE.

Other video inputs include a pair of HDMI 2.0 and DisplayPort 1.2 ports. That’s typical for a monitor in this price range. There is also a 3.5mm audio output.

Menu commands are located on the front of the monitor. They don’t work as well as the joystick system found on many modern monitors, and menu navigation feels sluggish. 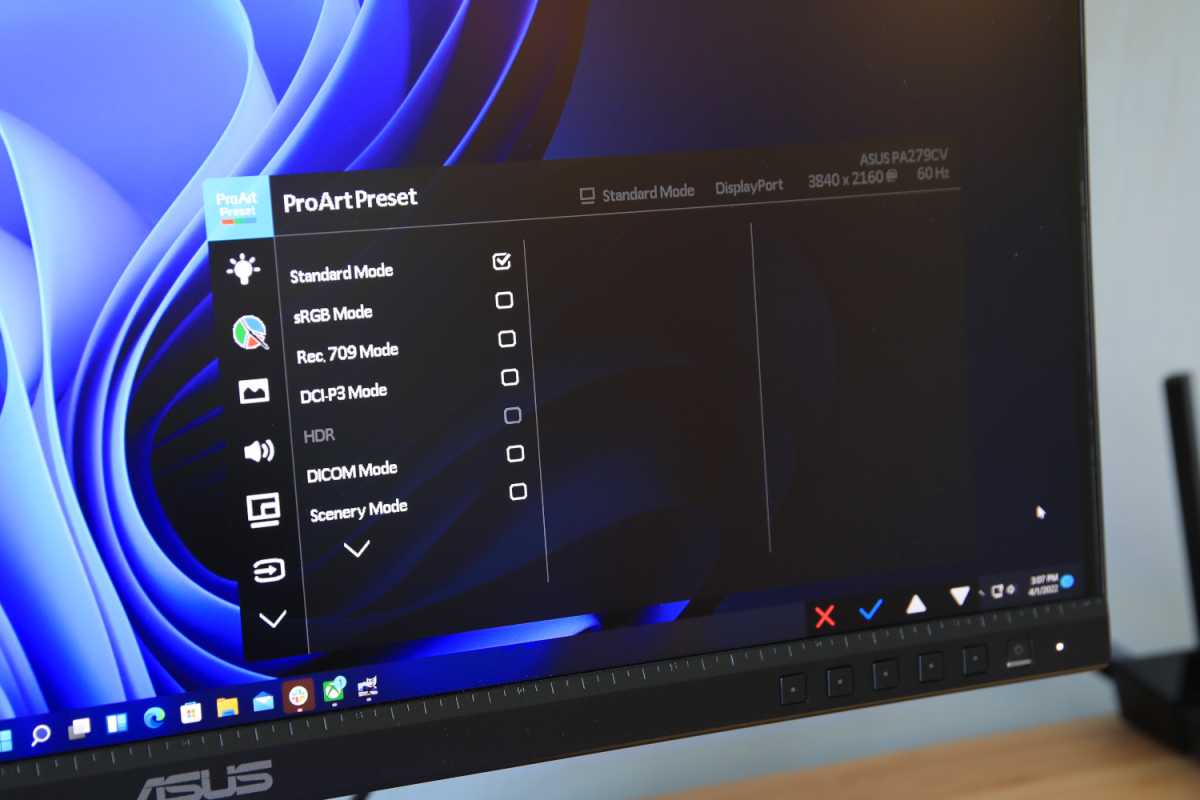 I can forgive that because the menus are full of options. There are many useful image quality presets, including sRGB, Rec. 709 and DCI-P3 modes. These come with customization options for color tint, color temperature, and gamma.

This is where the PA279CV’s focus on content creation becomes clear. A wide range of image quality options means you can tune this monitor to suit your work. Some monitors with roughly equal image quality, such as the Dell P2723DE, are less suitable for business users because they lack the flexibility of the PA279CV.

A pair of speakers round out the monitor’s functionality. They’re not great, but they’re okay for podcasts or YouTube and definitely better than nothing.

Asus’ ProArt brand is the company’s line of monitors aimed at professional work. That said, the range of the range is significant and the ProArt PA279CV is among the more affordable options. This limits its performance, but it does well within those limits. 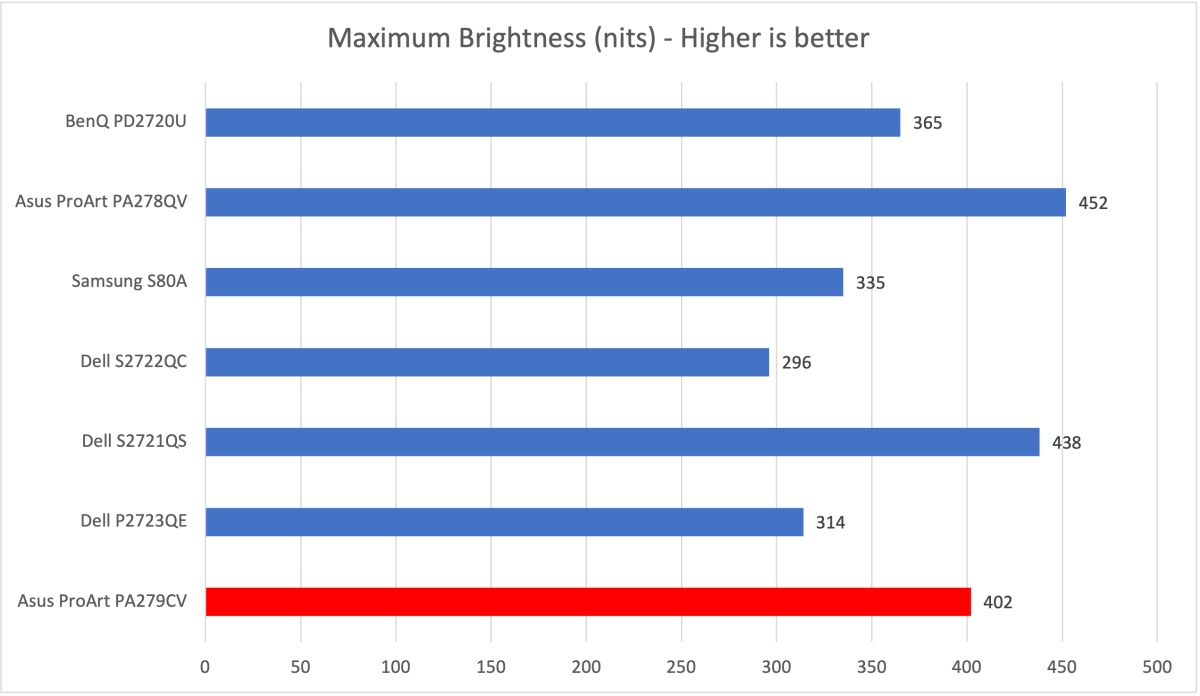 The PA279CV reaches a very high maximum brightness of 402 nits in SDR. That’s towards the high end for an SDR monitor and beats alternatives like the BenQ PD2720U or the Dell S2722QC. You will have no problem using this monitor even in the brightest rooms. 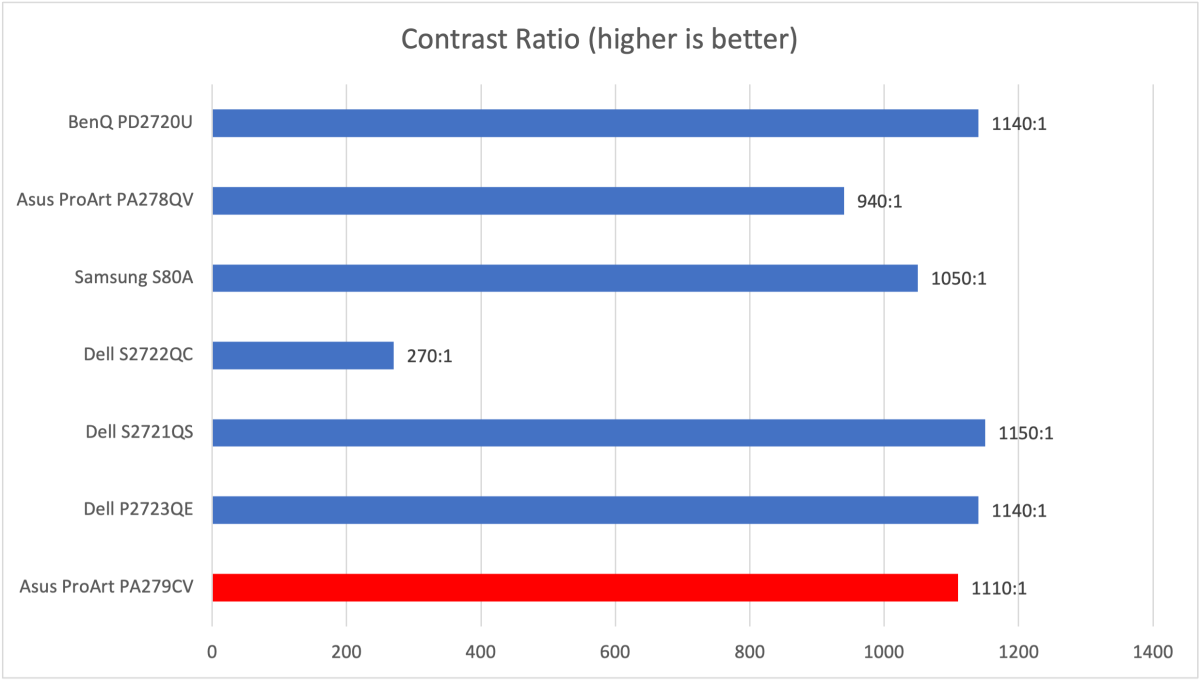 The contrast came in at a ratio of 1110:1, which is typical for a modern monitor with a quality IPS panel. It’s worth noting that this contrast ratio stays across a variety of brightness levels, which means black levels are pretty bad at maximum brightness. Although its contrast is not exceptional, the ProArt PA279CV has an advantage over several competitors. 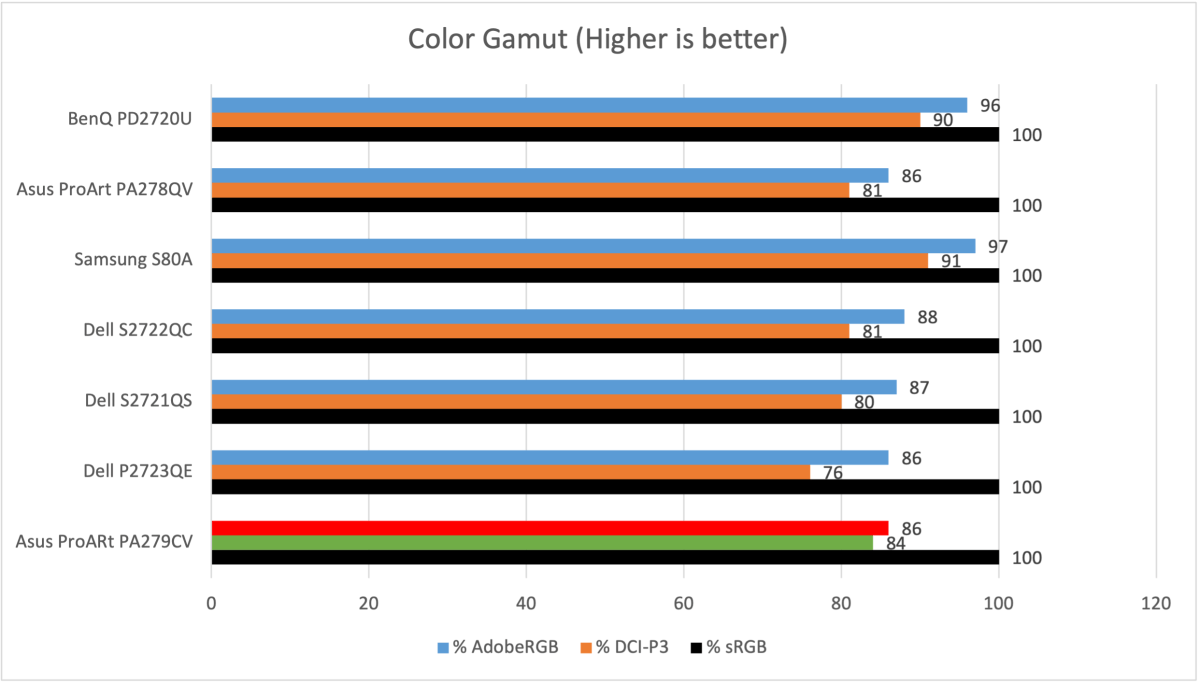 The color gamut is 100% sRGB, 86% DCI-P3 and 84% Adobe-RGB. This monitor is not advertised as a wide color gamut display and indeed its performance confirms this limitation. The monitor is suitable for narrower gamuts including sRGB and Rec.709, but it’s not a good choice if you need to work in DCI-P3. How important this is depends on your needs. If you need good DCI-P3 coverage, well, you probably already know that.

The performance of the PA279CV is typical of its price range. There are similarly priced monitors with a wide color gamut, like Samsung’s S80A and BenQ’s Mobiuz EX2710Q gaming monitor. These lack Asus’ image quality adjustment settings though, so they’re not a great choice for content creation. 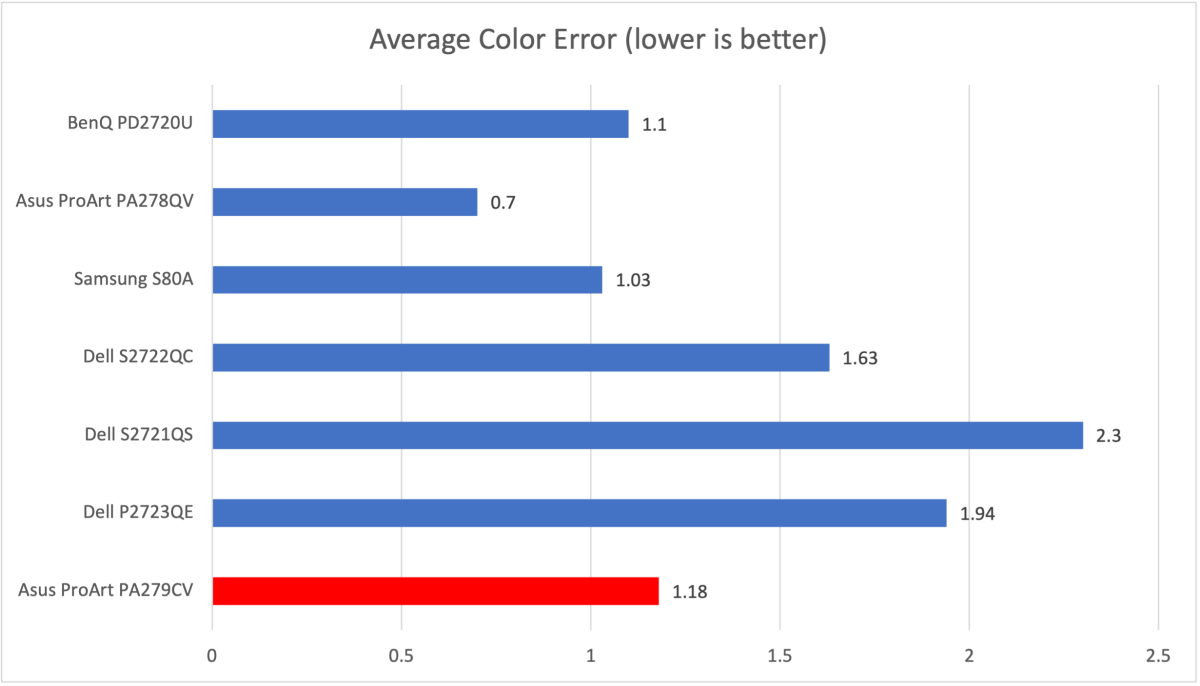 The measured color error came in at an average of 1.18 in standard mode (other picture quality presets are similar, with a maximum average color error of 1.94 in DCI-P3 mode). That’s a great result for an affordable, usable professional monitor for most content. Everything displayed on the PA279CV will be realistic and true to the creator’s intent. It’s useful for work, of course, but also for games and movies.

Color accuracy is supported by a default gamma curve of 2.2 and a default color temperature of 6600K, just short of my desired target of 6500K. It’s also a 4K monitor, with excellent sharpness and text clarity. Everything looks clean and crisp, which is nice even when browsing the web.

There is one image quality issue worth noting, and that is uniformity. The luminance variance was up to 20%, meaning some parts of the screen are much brighter than others. It can be a real distraction when working with dark photos or videos, or even when watching Netflix. There’s also quite a significant vignette effect caused by the edge-lit backlight. This is not uncommon for an edge-lit monitor, but I think the PA279CV exhibits this problem more than some of its competitors, like the BenQ PD2720U or Dell’s Ultrasharp monitors.

Overall, the ProArt PA279CV performs well for its price. Make no mistake: this monitor is not intended for mastering high-end film or photography. But the truth is that most content creators don’t even need a wide color gamut because it’s more common to target digital content that stays in the sRGB color space. The PA279CV is ideal for YouTube creators, entry-level photographers, and digital artists who need quality on a budget.

HDR is not a flagship feature of the ProArt PA279CV, but it is supported. The monitor achieves a fairly high sustained HDR brightness of 491 nits, so it can certainly pump up the luminance if needed. 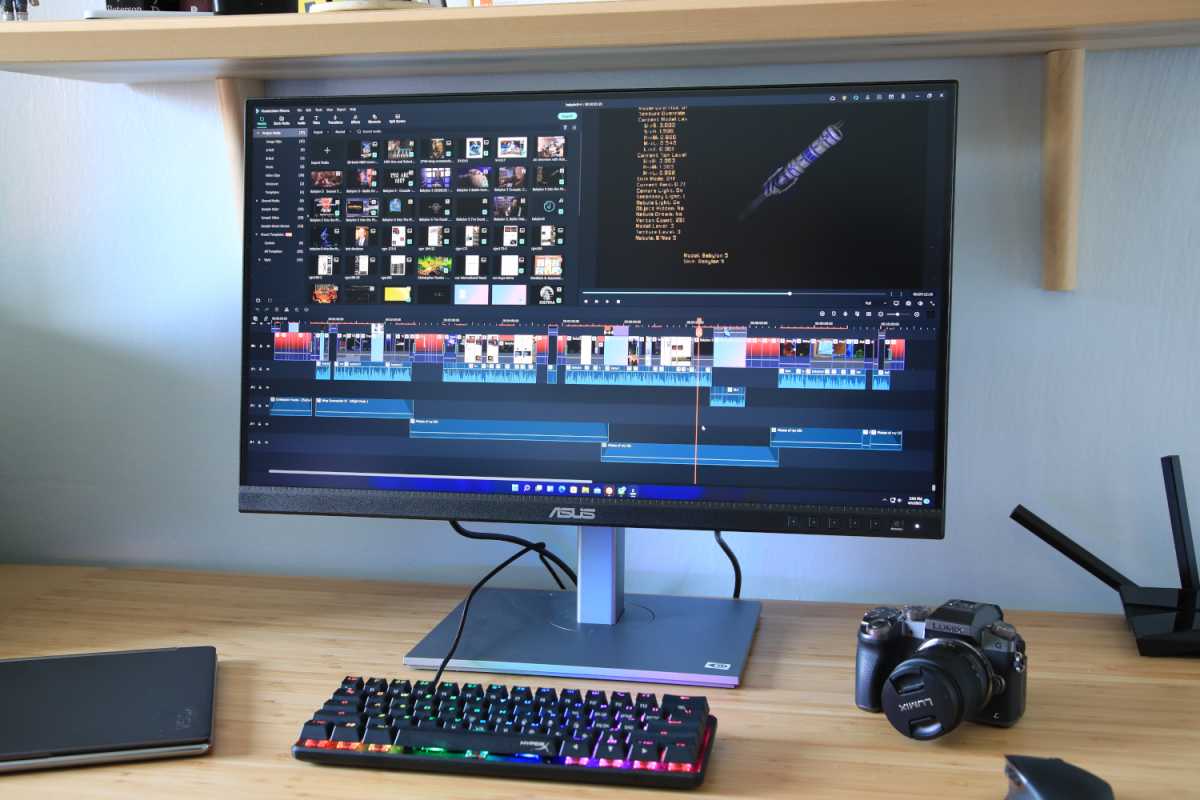 It’s otherwise a lackluster performer, however. The monitor doesn’t have a wide color gamut and doesn’t have local dimming, so it lacks both color and contrast for HDR to work. In fact, the contrast at maximum brightness is lowered to 960:1.

In short, the HDR isn’t good, but that’s typical for a monitor in this price range. Those who really want excellent HDR performance will need to budget for a Mini-LED monitor like the Asus ProArt PA32UCX-PK, which is around eight times as expensive.

Adaptive Sync is supported in a 40Hz to 60Hz refresh range. Strangely, the monitor does not claim AMD FreeSync or Nvidia G-Sync support in any form. Adaptive Sync seemed to work smoothly with my Nvidia GeForce GTX 1080 Ti, but the lack of official support should give gamers pause.

Then again, I’m not sure if most gamers would look at this monitor to begin with, as it lacks an improved refresh rate and shows significant ghosting behind fast-moving objects.

More static games look great thanks to the monitor’s 4K resolution and accurate colors. However, gamers who want the sharpness of 4K resolution at 60Hz can find similar performance at a lower price with Dell’s S2721QS, Samsung’s S80A, or Viewsonic’s VX2776, among others.

The Asus ProArt PA279CV is a solid choice for content creators who want a color-accurate 4K monitor but don’t want to drain their savings account. It outperforms alternatives like the BenQ PD2720U and Dell S2722QC in terms of brightness and contrast without giving up connectivity or menu options.

Application deadline: April 30, 2022 Are you an African journalist, blogger, vlogger, content creator or podcaster living and working in Africa or the Diaspora? Are you passionate about promoting development-focused stories using emerging technologies and through visual, written, spoken and digital media? Apply for the inauguration African Union Media Fellowship. As Africa enters the 4and […]

Capcom, the developer and publisher of hit franchises like Resident Evil, Monster Hunter and Street Fighter, has announced a new content creation program designed to “celebrate and connect with” fans of its titles. The new initiative is called Capcom Creators, and the company says it “aims to build deeper and ongoing relationships with creators through […]

The use and awareness of cryptocurrency has increased in recent times, welcoming more and more people into the industry. Sadly, this boom in popularity is also causing shady characters to emerge, prompting people to invest in dishonest ventures. Therefore, it can sometimes be difficult to get authentic information about the crypto space. Fortunately, people strive […]