The Google search engine homepage has always been known for its minimalist design, not overloaded with superfluous elements. However, that could change soon. Google is currently testing widgets that can be placed at the bottom of the main page of the desktop version of the search engine.

9to5Google, which has already tested the new feature, reports that a “Hide content” toggle appears in the lower right corner of Google’s homepage. The lower left corner displays the user’s location, along with a notification that the information offered is based on the user’s previous web activity.

These maps appear at the very bottom of google.com. There’s a ‘Hide Content’ toggle in the lower right corner, while Google notes your postcode/city and explains that the information offered is ‘based on your past activity’. When the window is fully expanded, six cards are offered and they all expand on hover:

When the Widgets feature is active and the browser window is full screen, the user gets six map widgets that expand when hovered over them. Users have the following six widgets:

It should be noted that widgets are not currently available for all Google accounts. The company is likely testing the new feature and gathering feedback about it before deciding to roll it out in full. 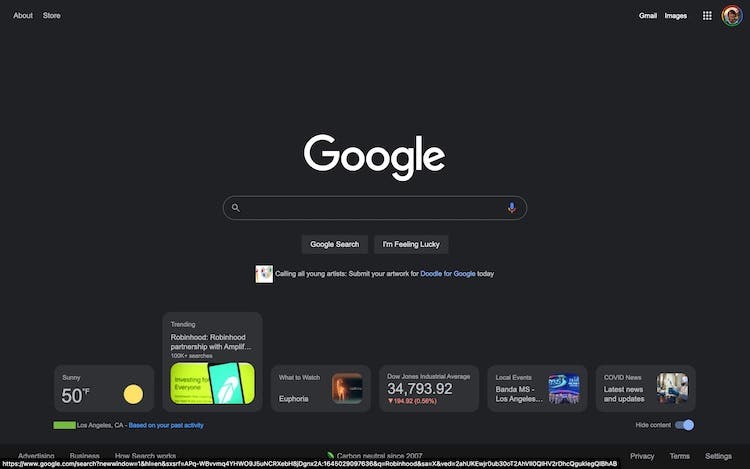 Comparison shopping service PriceRunner recently accused Google of violating EU antitrust laws; and filed a lawsuit with the Swedish Patent and Market Dispute Court; in order to recover $2.4 billion from the US company, writes Bloomberg, citing data from representatives of PriceRunner.

According to the applicant, Google manipulated search algorithms to promote its own product comparison services, causing harm to competitors. PriceRunner believes tech giant’s anti-competitive practices resulted in losses for service; that she intends to recover during the current trial.

PriceRunner, soon to be owned by Swedish fintech Klarna Bank, said the final lawsuit amount could be “significantly higher” because Google is still violating antitrust laws. Google representatives refrain from commenting on this issue.

New Jersey, United States – the Search Engine Optimization (SEO) Software The market report includes the upcoming challenges and opportunities in the market. It ensures a strengthened market position and a growing product portfolio by providing all the important details related to the market growth. It reveals some of the key insights and focuses on […]

Kidrex is a safe search engine for children

With the increasing use of the Internet, it becomes even more important and difficult for parents to keep an eye on their children’s browsing habits. For the past two years, children have been taking their lessons online, so parents have to leave them with the machines. We don’t know what our kids are browsing on […]

“Seller” is a column written by the seller side of the digital media community. Steven Shure has ridden big waves of subscription in the past. For 20 years he ran the Time Inc. magazine subscription program. Then he joined Amazon as the vice president of a small project called Prime. He oversaw various Amazon consumer […]